Symptomatic (or merely unsightly) venulectasias and telangiectasia on the lower extremities occur in 29% to 41% of woman and 6% to 15% of men in the United States. These smaller veins are most commonly indirectly or directly connected to larger reticular or varicose feeding veins. 53% of these patients experience associated symptoms. If not treated early this issue will inevitably lead to progressive worsening or superficial venous valvular insufficiency, eventually leading to deep venous valvular insufficiency 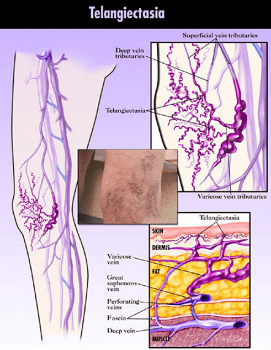 These statistics demonstrate the need for a clinical or non-invasive diagnostic work up in patient with telangiectatic leg veins and reinforces the view that “spider leg veins” arise from underlying varicose veins via venous hypertension, thus leading to the release or activation of vasoactive substance with resultant capillary or venular neogenesis (angiogenesis).

Office Hours
Get in touch